Reading the face of a person who is trying to conceal fear or other emotions is tricky business, according to a new Northwestern University study of electrical activity in the brain. 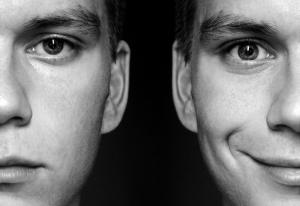 Results of the study revealed that the visual system differentially processed the fearful and happy faces, even though this processing did not lead to conscious experiences. (Credit: iStockphoto/Alexey Teterin) Though such “microexpressions” as a brief flash of fear are unlikely to be consciously noticed, they still get picked up by the brain and make their way through the visual system. The effect can alter perception and the way other people are treated or judged, the study concludes.

“Even though our study subjects were not aware that they were viewing subliminal emotional expressions, their brain activity was altered within 200 milliseconds,” said Ken Paller, co-investigator of the study and professor of psychology in the Weinberg College of Arts and Sciences at Northwestern. “As a result, the ratings of facial expressions they did see were biased.”

In other words, sometimes when it seems like you are acting on the vagaries of instinct, your brain is actually responding to real information about others that bubbles just beneath your consciousness.

The study included tests to determine whether study volunteers had a tendency to experience anxiety, particularly in social situations. Those who tended to be socially anxious had the strongest brain response to subliminal expressions of fear.

“The findings have direct implications for understanding psychiatric disorders such as phobia, obsessive-compulsive disorder and generalized anxiety disorder,” said Wen Li, lead author of the study and postdoctoral fellow at Northwestern’s Feinberg School of Medicine.

“Neural and Behavioral Evidence for Affective Priming from Unconsciously Perceived Emotional Facial Expressions and the Influence of Trait Anxiety,” will be published in an upcoming issue of the Journal of Cognitive Neuroscience. Besides Li and Paller, the study’s co-authors include Stephan Boehm, currently at the University of Wales at Bangor, and Richard Zinbarg, associate professor of psychology at Northwestern.

How Did it Work?

How Did the Study Work?

The study utilized neuroelectrical activity recorded from 64 EEG electrodes placed on the scalps of the volunteers to monitor their brains’ analyses of sensory input. Volunteers evaluated 70 different surprise faces. Half of the faces were primed by fearful expressions and half by happy expressions. The prime faces — with happy or fearful expressions — were shown for 30 milliseconds immediately prior to each surprise face.

The volunteers rated the surprise faces primed by fear more negatively on average than those primed by happiness.

Results of the study revealed that the visual system differentially processed the fearful and happy faces, even though this processing did not lead to conscious experiences.

“Environmental events that signal danger, such as someone’s facial expression of fear, may be preferentially detected so as to alert the individual to make an appropriate response,” Paller said.

“Our results show that an unconsciously perceived signal of threat, such as a brief facial expression of fear, can still bubble up and unwittingly influence social judgments and how we act,” said Li.

Those with a more anxious personality exhibited more biased negative evaluations of fear-primed surprise faces and also greater brain-wave indications of threat processing. Greater brain responses to threat in those prone to anxiety may thus lead to larger influences on social evaluation.

“Although people can do their best to avoid situations that they perceive as threatening, their brains may still be highly attuned to subtle environmental signals of threat,” Paller said. “A heightened sensitivity to subliminal threat may thus cause excessive anxiety.”

Microexpressions that people make may differ from voluntary expressions of emotion. But in either case, fear can be signaled by contraction of muscles that raise the inner brow, the outer brow, the upper lid, plus stretching the lips, parting the lips and dropping the jaw.

“The ability to detect microexpressions may allow an observer to be more empathetic and sense someone’s true intentions or motivation,” said Paller. “Valuable as this ability may be, when someone is paying you a compliment it is sometimes better to take it at face value rather than read more into it.”

One “live” seminar with NOTHING edited out. Learn the secrets of covert hypnosis, subliminal persuasion (including HOW to make subliminal dvd’s!) and subtle forms of influence I’ve never talked about anywhere before.

And, where I didn’t know all the answers (like ALL the specifics in making a subliminal dvd) I brought in the subliminal video expert Mark Ryan. More on this in a minute (I know…it’s so cool…)

This DVD program is hot-off-the-presses and contains demonstrations of nonverbal and verbal communication that you haven’t seen or experienced before.

You will learn how to tell a story with Covert Hypnosis. This necessary skill set is what separates those who are good at subtle influence… and those that are truly masters. And I walk you through it, demo it and even have the class participate. You will be blown away. Promise.

Turn the DVD program off after just this DVD and you will have one heck of a return on your investment. (I promise, almost no one can tell a story well and it is stories that sell. Stories that market. Stories make money.)

Oh…and I’ll tell you why you want and need to know this…. 🙂

Next you’re going to find out the seemingly magical use of energy around you to create incredible comfort and trust or discomfort and fear. I would argue that it isn’t magic, that it’s science but no time for that. The skills are all transferable. You’ll see audience members interact with me and in minutes learn how to do this most important skill.

You’re going to find out how to shape beliefs with single words or images.

I’m going to show you how simply tearing a piece of paper can cause enormous pain inside of someone. And what you can learn from this!

You”ll find out the secrets that Mark Ryan and I use to create what may be the only commercially available subliminal DVD’s that work. We will both explain why and then….you’re going to find out why we are hesitating before releasing more.

*EVERYTHING* in this seminar has been scientifically tested. No guess work. No BS. No time wasters. It’s 100% proven technology.

You will have fun and learn at the same time.

Unlike most programs you watch, I explain EVERYTHING I DO LIVE. Questions are taken and answered from the audience. It’s all here for you.

This program, newly released, comes on six DVD’s. It’s everything that those who attended got INCLUDING the manual which is rich in research and information on subliminal messaging.

You are one of the first to have this incredible program and I am proud that you will.

6-DVD with complete Manual on CD