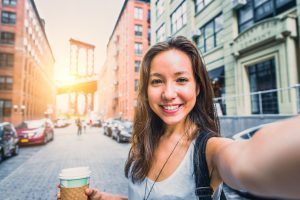 The picture is of course a simple “selfie.” Snap three shots with the Samsung, pick one, upload. Most people have an extra step that involves editing to cover up blemishes, bad lighting, facial flaws. I’ll have to learn how to do that!

There are practical advantages of a selfie. I watched a bunch of people in April take pictures of themselves in front of the Grand Canyon. You’re by yourself, you go to a cool place. It seems reasonable to snap a shot… or 50! One of the coolest places on the planet and you’re there. Snap away. It makes sense. You’ll want memories of that, even if memories taste best shared.

What makes me think anyone would want to see a selfie of me? Does it help my “brand” in business? Do I want people to see that I think I might look younger in 2019 than I did in 2009? Why? Am I a narcissist?

Narcissism… I asked my friend Gary Moon to send me a test for narcissism. It’s a personality disorder I don’t have. Meanwhile Gary and I compared results and he not only isn’t a narcissist he’s the opposite of a narcissist.

The number of narcissists in the world is growing…quickly. Does it matter?

Facebook is a likely vehicle to change your world for better or worse. Your physical and emotional longevity and mental health are dramatically impacted by Facebook.

Facebook stands as one of the few seriously major changes in history.

Because of Facebook, your life could get a lot better or a lot worse over the next year.

Remember the notion of “six degrees of separation?”

You are now at 2.3 degrees of separation.

The online social evolution, of course, would never have happened without the smart phone.

Before the smart phone, people talked on their cell phone. Now of course it’s text, photos, and posts to Instagram and Facebook.

Before Facebook you could “meet someone online” but you were going to meet them at match.com or similar.

Today, a couple of sentences on Facebook with the right person at the right time can lead to a complete change of life.

If you would have told me I would meet someone special that lived 4,000 miles away as the crow flies, I would have shook my head and wondered if you had lost your mind.

But that’s what happened in 2016. Certainly the richest year in life experience. Facebook played an enormous role in both the rise and later fall that occurred.

And Facebook’s unique characteristics aided both sides of the coin. The Pleasure and Pain of Facebook.

The goal of this article is to highlight research about Facebook while offering a few thoughts about love, arguments, pain, happiness, depression, and even divorce in part because of Facebook.

There’s no way I could get you off Facebook. So instead, I want to show you how to optimize the most powerful connector and disconnector we’ll ever experience in our lives. Once you see what this medium of connection is doing to you, and for you, you will be able to make life adjustments, before the Facebook triggered life adjustments make your next mess in life.

Long distance relationships have been going on for thousands of years. They’re not easy and for me, the story of separating from a very special person is important to the reader only as an example of the TWO headed coin of good good/bad. It’s a lot easier to learn from someone else’s success and mistakes before you carry on.

I took a couple of weeks off of Facebook and a couple hundred people emailed, messaged and so forth to see what was up or if I was healthy, wealthy and wise.

I was pretty surprised. Not only was I “missed”, but something was clearly wrong.

I’ll show you how to get away from Facebook for periods when you need to be alive in real life, later in the article.

I’m addicted to all kinds of things, just like you are.

When you were a kid you probably realized your Mom and Dad were killing themselves smoking cigarettes long before they were willing to admit it. They really wanted the facts to fly away. And of course a lot of the same kids went on to smoke themselves and a lot of them died early.

Addiction is where you feel like you need something and when it is missing,you feel like a part of you is not there. 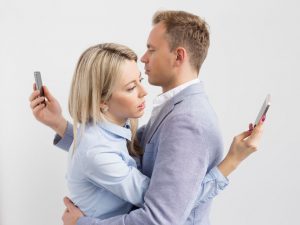 If a phone is an extension of the Self then Facebook is a virtual world where you are your own Avatar…sort of.

Is Facebook a bad drug? A good drug? Can you and I live better with Facebook or is it all downhill? Can you make money on Facebook?! Can you find love on Facebook? How can it all backfire?

As you read through the lines, you can see I have mixed feelings about this medium, along with great optimism and pessimism about Facebook.

Let’s look at the facts from research done in the last 2 years.

1) People who are materialistic (they crave possessions) use Facebook more and have more friends. Their Facebook friends are similar to possessions.

Materialistic people tend to need to compare themselves with others both on Facebook.

This is consistent with the fact that humans are possession creatures in general and tend to feel ownership over others in their environment as quickly as 30 minutes after meeting someone.

In the U.S., the idea of objectifying other people is almost seen as evil. On Facebook, the same people who are angry about objectification of others…are not just doing but living the same behavior.

2) People exposed to the Facebook logo experience pleasure. Not only are you getting a dopamine release from some of the experiences you have on Facebook, the LOGO of Facebook is giving you that same rush.

5) The more “likes” a person “gives to others” correlates with greater depression. Does a “like” mean “please like me?” I’m not sure. That research is incomplete.

6)People who post Facebook status updates about their romantic partner are more likely to have low self-esteem.

7)Those who brag about diets, exercise, and accomplishments are typically narcissists, according to new research.

8) Narcissists tend to get more likes, reinforcing their personality tendency.

9) Narcissists also wrote more status updates about their diet and exercise routine, suggesting that they use Facebook to broadcast the effort they put into their physical appearance.

10) Making social comparisons between your life and others can trigger depression. Stop doing this. Yes, I compare myself to others. For me it is motivating, but I’m just like anyone else, most comparisons do not trigger great feelings. Remember this…

11) The popular social media website and its open sharing of information is a vital and often a significant tool against government corruption in countries where press freedom is curbed or banned.

Facebook has given a platform to the poor on a couple of continents.

12) A study of 12 million Facebook users suggests that using Facebook is associated with living longer — when it serves to maintain and enhance your real-world social ties.

13)The more time adolescent girls spend in front of Facebook, the more their chances of developing a negative body image and various eating disorders, such as anorexia, bulimia and exaggerated dieting.

14)Simply building up followers on Facebook isn’t enough to boost a brands sales. If companies want to convert social media fans into more active customers, they have to engage them with advertising, according to a new study.

15) Facebook is now a leading cause of divorce. 1/3 of all divorces are occurring in significant part because of Facebook use.

Next week? Let’s talk about how to use Facebook now that we know some of the pluses and minuses of Facebook.

How would you like to be in a room with a dozen superstars…all getting cutting-edge insights into growing your business, making more sales, simplifying your marketing and making it pay off?

“Your ability to focus and get to the heart of the matter in minutes is what I love about being in Inner Circle. It’s your greatest gift, (next to your boundless compassion and maybe it is a part of that) in my opinion.” Sonya Lenzo, St. Paul, MN

What will happen when you have every secret in the mind of Kevin Hogan?

How would it feel to be the PRIORITY APPOINTMENT on Kevin Hogan’s SUCCESS CALENDAR, three times this year?

How would you like to have the answer to every question you have about making more sales, getting people in the door, running the unbelievably profitable website you so need, and closing every deal possible?

How about one year of daily access to Kevin Hogan via email?

How would you like to know what Kevin Hogan knows two years before it hits a book, a year before it makes it to CD and six months before it is released in Boot Camp or one of ………four annual E-Courses?

That’s what is at stake.

I’ve created a two-level Coaching and Mentoring Inner Circle for a very select group of people.

Find Out About the Inner Circle

Speaker? Learn how you can start presenting “Psychology of Persuasion” and “The Science of Influence” Seminars!

If you already give seminars and trainings, coach, teach, or consult with self-employed professionals, business owners, or salespeople, why not add the Psychology of Persuasion or Science of Influence Seminar program to your professional toolbox? With a Licensee Kit, you get all the materials to deliver either one of these powerful programs to any company, group or association that sells or needs to market to make money. For years Kevin taught the Persuasion program at the University of St.Thomas Management Center and numerous adult education facilities. It has been delivered in different countries around the world and has been perfected for YOU.

Find Out How to Become a Persuasion and Influence Licensee