Reading, decoding and interpreting body language is a science! Every action or micro-action takes place within a context and in reaction to other actions that go on around the individual. Body language has meaning that few understand and most mis-interpret. This course about body language will probably teach you more than you have ever learned!

Whether you want to learn the body language of love, dating or closing the deal, you have come to the source. The analysis I’m going to give you as part of this course combines “liking” and deception. It is fairly complex to analyze human behavior in snapshots in time. I made judgments on the relationships of these couples based solely upon these photographs and the apparent context in which they were taken.

My goal for you is to become aware of a few of the subtle nuances that you can begin picking up from now on. Instead of telling you each little nuance in a boring, clinical way, I’m going to let you have some fun and invest just a few minutes into being a body language expert with me. Welcome to Decoding and Interpreting Body Language Interactive Home Study Course! Let’s begin.

Photographs have been sent to me by media sources for body language analysis, or used by license through PRPhotos.com. Most have been published in magazines, newspapers, or other media publications. My analyses here are meant to go further in-depth from what was published. 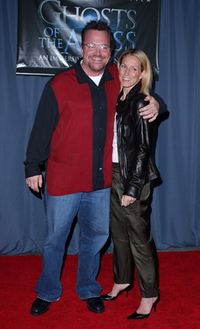 Tom Arnold has filed for legal separation from his third wife, Shelby Roos, after four years of marriage, his spokeswoman said Tuesday.

Staci Wolfe. The 47-year-old actor-comedian, whose screen credits include “True Lies,” and Roos, 34, have no children. They were married in Beverly Hills in 2002. Photograph by PR Photos

Update: The on-again, off-again relationship between Ben Affleck and Jennifer Lopez is off. Again. And this time, it looks like it’s for good.

Jennifer Lopez ended the engagement, one of her publicists told The Associated Press on Thursday. As reported on cnn.com 1/23/2004.

This concludes the interactive CD/Website portion of your course.

For more information about our special prices on other body language programs, please see our Store

Previous: Money Can’t Buy
Next: 3 Secrets About Body Language That are Essential to Your Success