3. Surprising Moment (ex boyfriend walks in) or Experience – You’re watching the game on TV and the ex walks in. Or maybe you’re with your girlfriend in Vegas and you propose on the casino floor. (Talk about attention.)

4. Salience (Something that is important to YOU) – I walk into my hotel suite only to find it is a regular room, 30 square meters. This is important to me and I have to call down to get moved to a suite. A letter from the IRS is pulled from the mailbox. An email from someone offering you a book contract. You’re at the store and see the ingredients you need to make a birthday cake for someone.

Salience simply means that something is important in this moment to you. (Seeing those same birthday cake ingredients next month won’t matter a lick. But the IRS letter will always be special…)

5. Entropy (Message fading or randomness in moving experience) We naturally attend to things that are fading away. You’re taking off in an airplane and all the other planes at the gates and landing are very quickly little dots on the ground as are the cars and buildings.

A common special effect in video is the fading of a picture to another image or simply a blank screen.

Think of the five factors and creating attention getting flashes becomes much easier.

Legend Point: There is a DIFFERENCE between what gets attention and what gets picked (bought), but if you DO NOT get attention, you CAN NOT get bought!

The scientific research showed that SURPRISE is the most important factor in attention, followed by salience (importance to YOU), and entropy (unpredictability, randomness of events or experience).

Legend Point: YOU can utilize all three different elements of surprise. Surprise is NOW PREDICTABLE. The researchers have discovered that surprise is the affect (EMOTION) of information or perception of information by the observer.

Write that down. Tape it to your computer.

“Life is full of surprises, ranging from a great Christmas gift or a new magic trick, to wardrobe malfunctions, reckless drivers, terrorist attacks and tsunamis. Key to our survival is our ability to attend to, identify, and learn from surprising events,” say Itti and Baldi.

Until now surprise was not able to be modeled. That has now changed!

Here is an example of how a top salesman in Poland got me to get me to touch his car…and his hand. The event had finished an hour earlier. I was hot in the 92 degree amphitheater but Krystof managed to get me to smile and be just a little uncomfortable, gathering attention and pictures of his success. Brilliant strategy on his part.

YOU can BE #1. Utilizing these scientific discoveries, you can get attention, stand out from the crowd and be picked up like a menu!

Now: Some facts from the research that you and I can easily understand and apply. Through thousands of measurements in numerous experiments the scientists learned that:

It’s like I tell my son…”a joke MIGHT be funny the first time you tell it to someone…it’s not very likely to be funny the second time.”

Surprise can take many forms as the researchers have shown us. Coupled with salience and entropy you have the factors of making YOU #1.

Do you need to have listened to any of the previous CD’s to use this program?

No. It has been intentionally designed to be newcomer friendly.

For those of you who have only been “here” for a year or less, this program, The Science of Influence Master Volumes 61-72 is my effort to “top” what most everyone reports as their favorite set of the Library, 49-60. 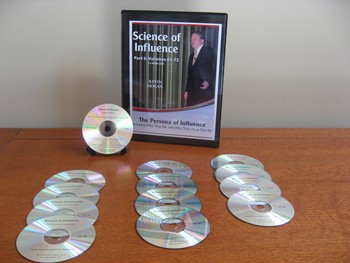 When I listened to it, I felt comfortable that this program
accomplishes that. 61-72 is superior.

The field of influence and it’s subfield of persuasion continue to grow
with fresh research from the best minds on the planet.

More books about persuasion were published in the last three years
than in recorded history to date.

Almost all of these books were rehash of Cialdini, Carnegie, and
myself. There wasn’t really anything new.

But the persuasion and researchers….well that is a different story.
I had a “field day” this year stacking just shy of seven FEET of research.
I’ve synthesized this with results from dozens of real world applications.

Here’s some of what I’ve distilled from current research that you
can put into immediate use:

We learned a lot about the relationship of how people “feel about
products, services and people” and the mental shortcuts they use to
buy.

The first cluster of material I developed was about how people
connect with YOU when they buy from you.

So, Who Is Your Customer, Anyway?

What do they think?
How do they feel?
Does it matter?
When?
So what? Can that be used for ANYTHING?
Turns out it can….

It’s in a cluster I call IDENTITY.
Identity research could fill 12 CD’s all by itself, but that would
have left too much excluded that I wanted you to have NOW.

So, I put together the core concepts of IDENTIFICATION and IDENTITY
and how YOU can utilize this cluster of information in influencing
others.

One example would be something like,
“If you know someone is a Republican who voted for Bush in the last
election, how does that help me predict what they will think, buy,
and feel about it all today when I ask them to buy from me?”

Obviously we all identify with other people.
Around the house here and in the home office, you’ll hear people
refer to me as being just like HOUSE (House M.D./Hugh Laurie). I find
that hard to imagine as he is older than I am and uses a cane….

In public, people tell me that I remind them of Kelsey Grammer,
Robin Williams, Drew Carey and David Letterman all rolled into one.
Must be a very overweight guy….

So the point is that they identify me….with them.

That means they will SEE ME through those filters. Those filters
will completely change their perceptions of me, my work and whether
they will hire me or not. For years people have used the word filters….

How would you like to know what that REALLY MEANS?

How would you like to understand what you get from a filter?!

Identification and Identity are profound areas of influence research
that are now coming to the surface. It’s nothing short of fascinating
and of course no one knows about it yet.

I DID see a couple of Internet Marketers use material that they got
at Boot Camp where I touched on Identity. I think they did rather
well in their launch…..

Aside from that you will be the first to use this virgin research.

Because the concept of “persona” is so poorly understood and
underutilized outside of show business and branding, I do show you
how to develop your own persona. Little is more important in being
THE person want to do business with…I’ll come to that in a
minute….

I decided not to open with something so profound, however.

10 Simple Steps to Persuade Anyone

Mark Joyner, who is probably the all time #1 Internet
Marketer on the planet, asked me to write a small piece of his book,
Simpleology. (Very good book btw)

He wanted 10 steps I use when I persuade. Not when other people
persuade, but when I do, and he wanted me to make them simple and
easy to understand no matter how complex they are.

That was a challenge but in doing some self-modeling I was able to
develop quite a cool construct that I’ve never written about and now
for the first time you get it all.

This one long CD is of significant value to those who want to
influence, especially in business. I’d like to say it’s worth the
price of admission but would you think one CD could be worth $600?

Maybe not…it is…but maybe not. So I’ll just say it’s pretty
excellent and leave it at that….

Finding the meeting point in the world between you and the universe
of people who would LOVE to do business with you, is the subject of
the next couple of CD’s.

Legend Point: YOU are THE answer for a group of people out there.
I show you how to project the image and persona you need to project to
draw that group to you.

This portion of Science of Influence 61-72 is just too cool. It was a
lot of fun to synthesize the work that’s been done in this area and
make it pretty simple to understand and just as easy to make real for
you.

In Science of Influence Four, I briefly touched on MVD.
MVD is short for Most Valued Dimension.

No one (no one) had ever reported this phenomenon to the public
except …me.

So for most people, it was so unusual that it went right over their
heads. But about 20 people wrote this year and asked a ton of
questions about how to calculate the MVD for themselves.

This is an incredibly potent persuasion tool that is waiting for
people to learn. This is NOT easy and it is NOT simple.

I have made it approachable.

Once again, if I could say that this CD was worth the price of
admission…..but I won’t. I’ll wait for YOU to tell ME.

How do Mind Readers Know What You’re Thinking?
The other thing people constantly ask is how I read their minds so
easily.
OK.

The Mind Reading CD is *definitely* worth the price of admission, no
maybe’s about it. It’s frigging excellent.

Enough said….you’ll see. (And do listen to this CD numerous times.)

The Ultimate Power Factor in Persuasion

CD 67 discusses in detail the two most important factors in
persuasion, bar none.
In detail that I’ve never given this subject, you will gain an
awakening awareness to these two core concepts of behavior and the
keys to control of behavior.

The 3rd most commonly requested information was “subliminal X.” Man, do people want to know about subliminal stuff and you should, too, because it is the future of marketing and influence.

Sooooo….you get it one crystal clear hour where I pound out recent research and what it means to how you will persuade, or not.

Fewer people ask for “recent research” unless we count “what’s new in persuasion,” and then that is what the next program is about.

Current Research Gives You a 3:1 Edge

Current research in persuasion is voluminous and over the next two CD’s I cover a LOT of stuff quite quickly almost always with examples
and specifics for YOU.

And I love new stuff…

You will like. You will put into use immediately. The final two CD’s are pretty cool.

A Complete Guide to Analyzing Your Customer

For the first time ever, I show you how to analyze your customer.

The questions you want to ask YOURSELF about YOUR CUSTOMER (or the girl or whoever) and then I show you how to utilize that analysis to
cause people to “change their minds” (and yes, their behavior). Once again, cutting-edge research merges with real world applications and makes you the master. (Well, maybe not after listening just once…but, drill this stuff into your brain a few times, and you will do very well, indeed.)

Science of Influence Volumes 61-72 will take you through the next quantum leap.

Get Science of Influence VI Today!

Pages: Page 1 Page 2
Previous: Motivation for All You Deserve
Next: Body Language of Powerful Men