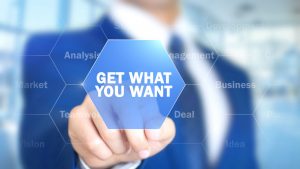 It’s the promise of…well just about everyone out there: You can Have “It” whatever “it” is….

Can you get what you want?

Legend Point: The realistic truth is that you CAN have most of what you want in life.

And for the most part, you can have pretty much what you want.

Obviously if you want “him” or “her” you need a scenario where they want you as well!

This is true in business and in personal relationships.

You really can achieve, not just if you “want it” but if you do indeed, DO IT.

Almost every person, place or thing you want, that you do not currently possess, is within reach but each requires something to change in your life, your world, your environment.

And the truth is that every change is really easy to begin and then it requires self discipline to maintain.

Seeing what you want is easy. You can do that sitting down. You can effectively plan, also sitting down. BUT then come the daily sustained actions, over time, that require you to behave in some way that is different for you to have X, whatever X is.

Hopefully that got all the “lookers” to stop reading.

This series of articles is really for you.

You’re someone who can see what they want and then commit to daily acquisitive actions.

But even you and I are resistant to change. Yep…me too. And that’s important to note for two reasons. 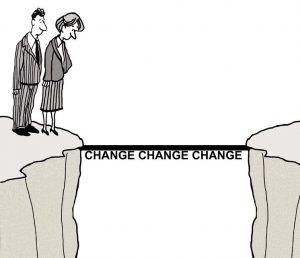 First, you must recognize that everyone has a familiar zone, valuable or devastating as it may be.

Second, those changes poorly considered, can really muck things up. That’s why a good simple plan is worth it’s weight in gold.

In order to defeat that resistance it’s necessary to know why it is there and then once you know resistance inside and out, planning to work through it is really quite simple. No “why” means no success…no victory.

Why Are You So Resistant to Change?

There’s a bunch of reasons beginning with your genes, filling your jeans and ending up in your brain…

In this three part series, you discover out the biggies, then you find out what to do about it.

Have you ever avoided doing something, even though it would make you feel good and help you accomplish a goal?

For example, let’s suppose you know you should start eating lower calorie meals.

So why is it that you eat fewer calories for a few weeks …but then before you know it you’re sitting on the couch…having given up?

You’ve heard me talk about familiarity forever. Why? It’s your number one challenge you face.

You can’t fail if you don’t change. Almost everyone hates to fail. I certainly don’t enjoy it, I just recognize it’s going to predictably happen within aspects of most endeavors. It’s like rain in Seattle. It’s not a terrible thing, it’s just something you know is going to happen.

You know the hamster wheel keeps on spinning every day with predictable outcomes and benefits. And it FEELS a LOT SAFER than it really is…

Let’s face it – the unknown is scary. And it causes enough fear at both the conscious and unconscious level to shut down the logic of growing, evolving and change.

Humans quickly develop the instinct/intuition to do NOTHING which you are not familiar with that may have caused insecurity in the past.

This happens for a simple reason.

You are born with trillions of neural connections in the brain. In just a couple of years MOST of those connections have atrophied through being told what not to do.

Don’t misunderstand, your parents probably did right by you most of the time.

Unfortunately when change is not encouraged and relished early on, those behaviors are literally extinguished. They vanish right out of the brain. Figuratively and literally.

What’s left in the brain after atrophy, is FAMILIAR. 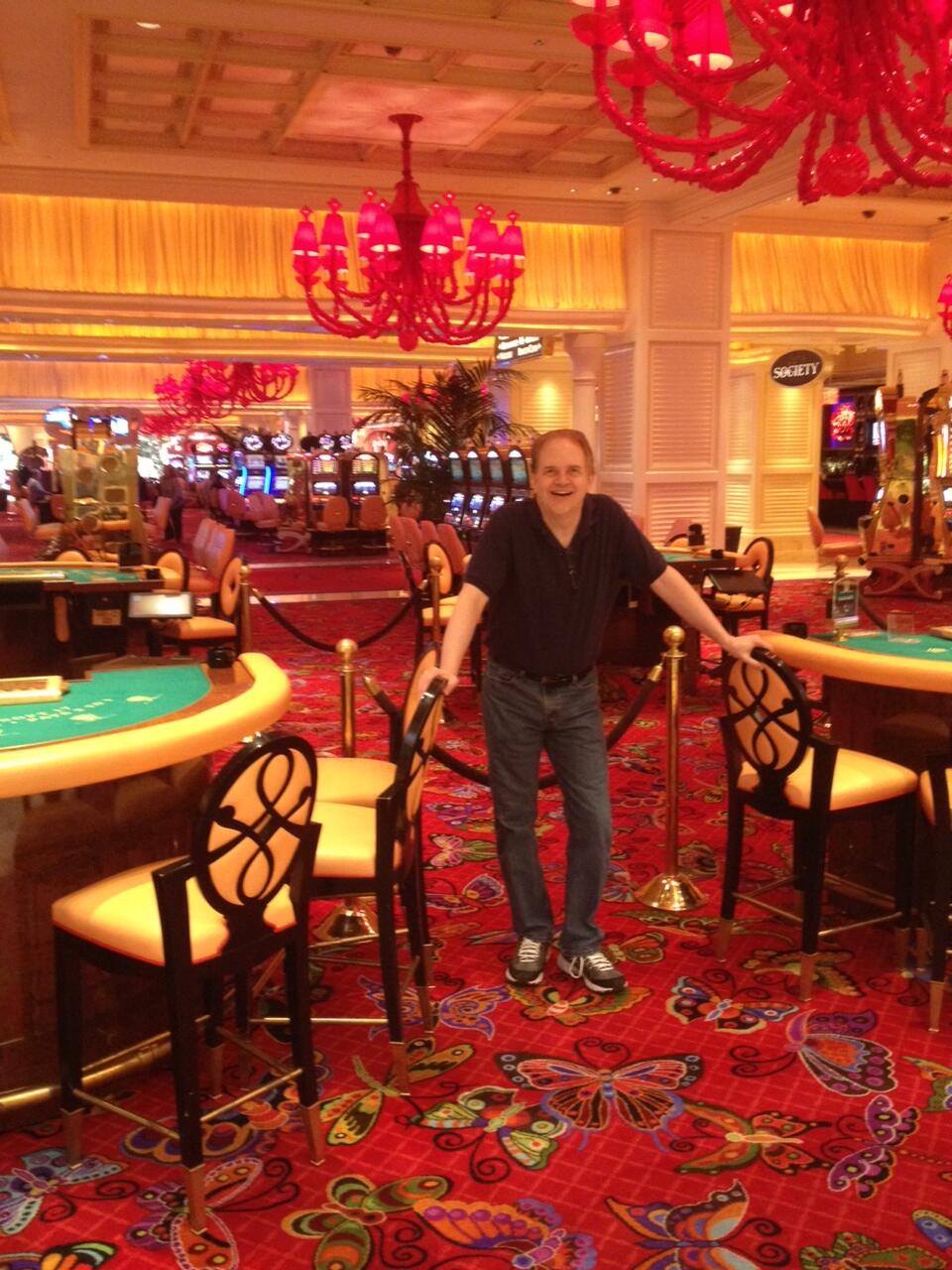 You’ve probably seen this photo of me at the Wynn in Las Vegas. It’s not a great photo or anything, it’s simply one I’m “familiar” with.

If you ask me where I want to go on “vacation” (something I am very unfamiliar with) I’d say Vegas. I love to play cards. I’m good at it. I win more often than I lose and in Vegas that is rare.

I’ve done events and been to lots of places. Sydney, Oahu, London, Krakow, Amsterdam, Edinburgh, Prague. All very cool. (I’ve also played cards in almost all of these places.)

What’s interesting is any one else in the world thinks of Prague and you are triggered to think of the Charles Bridge. And I do too…but if I can’t find a place to play cards somewhere, I feel uncomfortable. So the little reptile in my brain searches that out and when it finds a place to go play, THEN it finds the more rational reasons everyone goes to Prague.

This concept of familiarity is really what success and failure in life stand on.

If you get it, you understand MOST of human behavior.

If you understand the basics of human behavior, you will succeed in life. If you don’t…you don’t.

I was raised in a poor family. We had paper, pencil and a deck of cards for the longest time as the tools of entertainment…think of how predictive that is of Kevin Hogan in 2015…

Familiarity is the king size driver of all behavior.

A metaphor: At age six months you had 500 “houses” in your brain you could go explore and learn about. The neural nets were waiting and ready for sucking up more information and experiences. And you WANTED to do it. You were DRIVEN to explore. You WERE a sponge.

And then the plug was pulled on most of those experiences.

Two years later you had 50 metaphorical houses left in your brain that you could explore. As time went on, you had fewer and fewer choices. And by the time you were 30, if you’ve made it there, your world of possible lives to lead was down to one or two. In fact, the notion of “security” of a “job” is so ingrained in our brains it’s often hard to imagine doing ANYTHING other than what you are doing today.

By the time you had been assimilated, I mean educated, in school, you were down to very few life choices and opportunities. The ability to create, develop, explore, be curious, be excited about engagement had been sucked right out of your brain.

The remaining 10 or so areas of interest and excitement became familiar.

You got to high school and were told to select a “Major” in college.

Well no kidding! You only had 10 things you were potentially excited about and most of them were playing videos, watching the tube, sleeping, and getting into trouble.

You would have NO WAY to have a CLUE what might make an interesting profession…and in the future…no less.

Much easier to stick with what you are familiar.

And that is of course why so many kids follow in their parents footsteps. (This can be a blessing…or a curse right?!)

Consider this: you’re standing before the closed door of a very large room. Let’s suppose that you happen to know there’s a cash reward waiting for you if you open this door, walk across the room, and claim your reward. Simple, right? 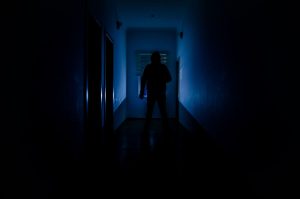 But there’s a problem: the room is pitch black, so dark that you can’t even see your hand in front of your face. Since you’ve never been in this room before, you have no idea what the interior of the room looks like.

Maybe it’s a completely empty room that you could simply walk across and collect your reward. But on the other hand, your imagination creates other interesting scenario’s like….could there could be broken glass on the floor, objects in the way that you’ll trip over, and things hanging from the ceiling that you’ll bump your head into…or WORSE!

For all you know there could be ANYTHING! You just don’t KNOW. It’s unfamiliar and uncomfortable and even though there is no reason to believe so, it’s scary.

This keeps you from getting what you want… Get rid of it.

Next Page: Get Rid of What to Get What You Want?